O ROOT OF JESSE
YOU STAND AS A SIGN FOR ALL PEOPLE
BEFORE YOU ALL RULERS KEEP SILENT
FROM YOU EACH NATION SEEKS HELP
O COME
FREE US; DO NOT MAKE US WAIT.

The great urge is to get political about this antiphon, probably because it does actually sound political. It sounds like the Root of Jesse is somehow a source of help and freedom for all nations and their leaders. It is political, but it is also personal, and also cosmic. It is central to most spiritual traditions and an archetype of the collective unconscious of humanity. I was awake most of last night meditating on this, this sacred tree.

I’m a dreamer and several weeks ago, before I was thinking about O Antiphons at all, I woke stunned by a dream of this tree. I stumbled into the Morning Room at Casa Chiara and, still reeling from what I can only call an encounter, I wrote the dream like this:

“I’m with a group of women, and we are entering into a deep forest by a large body of water. The mood is one of awe and discovery. The deeper we go, the more the canopy of trees covers the sun and the forest is cast into shadow. Through the shadows I see two overwhelming giant redwood trees—the biggest in the world. A person standing next to the larger one would seem the size of an embryo, or a bean, or a tiny river stone. I call out to the others and all of us attempt to move closer to the majestic trees. However the closer I get to the larger tree, the more dense the feel of it becomes—the less space there is around it—until I’m feeling crushed by the presence of the tree itself. It’s almost as though I am being weighed down “under” it, as though I am among its roots, part of it. I’ll be subsumed if I go farther, and yet the attraction and magnetism of the tree is profound.” 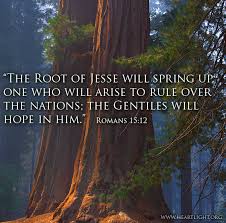 Most ancient cultures envisioned a “world tree” at the core of their spiritual life, of their cultural mythology. This image connected the earthly realm with the heavenly. It was the totem pole, the sacred oak, the Tree of Life in Eden, the tree of generations with Jesse as its root. The early Christians traced the genealogy of Jeshua (Jesus) back to Jesse, the grandfather of King David, and saw him as the flowering of that Root, the new World Tree that would reach out beyond a nation to include in its branches the “Others” or strangers then called Gentiles. Jeshua himself would be the Sacred Tree on which the opposites of the world would be reconciled. This is a lot to put my mind around. No wonder my dream stunned me.

The Sacred Tree, though, is even more than a human tribal or world genealogy. In the mystical Jewish Kabbalah it becomes the flowing of God into and through the created world. From Ein Soph, the divine emptiness, to Shekhinah, God among us, the tree’s branches are the energies or emanations of Being itself called the Sefirot. I recommend Daniel C. Matt’s book, The Essential Kabbalah, for meditations on each of these divine emanations, or as Matt says, “stages of God’s inner life, aspects of the divine personality…emerging from Ein Sof, the Endless.” They are the branches of the Sacred Tree and are: 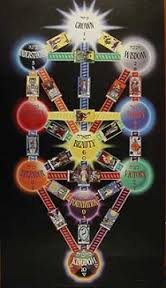 Here is the sign before whom rulers keep silence and nations seek help. Personally we enter through the roots and are drawn upwards. God does not change as we ascend, but we do, and as we share in the higher emanations of Being our hearts are transformed and our spirits overflow. IF we are willing. IF we dare to be absorbed into the roots of the Sacred Tree, even though there’s fear in it of oblivion. It will not be oblivion for the person, the nation or the ruler. It will be presence, covenant, splendor, eternity, beauty and compassion, power of right judgment, love and grace, understanding, wisdom and union with the Unending One.