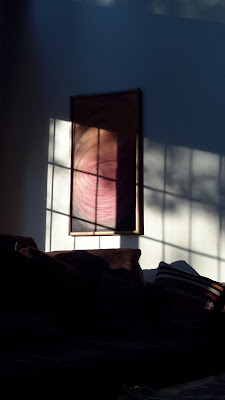 At sunset on the feast of Clare of Assisi (August 11) I sat in my chair in the living room and watched as this image appeared on the wall in front of me. The picture I painted years ago of the swirl of energy in the universe and in the human body-soul has lately come to resemble a Madonna and Child. It's what I see that for years I didn't see. In the reflection of sunset over her is the shadow of the ancient oak that graces our back yard, which to the Celtic people is the world tree, the core, the center of the universe and of Being-Itself. It holds us grounded. Around it we dance the dance of life.

I think, then, of a woman I saw on a street bench in Port Townsend last week. Her eyes stared into nothingness. Her face resembled browned parchment. She caressed that face over and over, her gnarled hand passing tenderly down from her hairline, curling around her chin, back up over her ear, through her hair to the top of her head and down again to her face in a kind of gentle infinity motion. Her presence stopped me in my tracks. What did I see in her?

We see what is in us to see. Clare wrote of gazing into the Mirror of Christ and discovering there her true self. I tried this and all I saw was the face of Christ. I felt disappointed; I expected to find my true self. Then one day that experience turned around completely topsy-turvy, completely inside-out. Had I ever seen myself except in a mirror? No. There's the physical mirror in the bathroom, of course, and it reflects my physical face, but there is also the mirror of another person's eyes. More than that, there is the mirror of the other person as an individual. More than that there is the mirror of the world, of the oak tree, of the bird and the river and the mountain and all the multitudinous things that fill the universe. I can see my Self only by reflection.

Several spiritual traditions have the saying: "I Am That." Back in the 1990's I was giving a talk to a large group of women and found myself saying, "I Am You," after which one woman stood right up from her chair and called out with an absolute kind of certainty, "You are NOT me!" (And now I admit to thinking, Thank God!) But now I also think that both of us were right.

We are the One and we are each the Many. It's a both/and. In the mirror of the Universe, of the tree, rock and cloud, and of a near infinity of others each of us can see that she is the Many, and in the mirror of Christ the Divine each disappears into the One.

This is earth. There's no escaping incarnation. There's no escaping time and space. But time is only time for a moment (as the poet, Eliot, says). We go in and out of time. Space, also, is ever and only space. Sometimes, looking into the mirror of anything--that photograph, for example--a single individual passes through into a wonderland of Oneness, an Infinite Wholeness that might be Christ as it was to Clare, or might be Krishna, or even (and I'm not being facetious) it might be a bag lady tracing infinity on her face as she sits at a street corner in my former hometown. And in that moment in and out of time I see! As another poet (Hopkins) cries out:

In a flash, at a trumpet crash
I am all at once what Christ is,  'since he was what I am, and
This Jack, joke, poor potsherd, 'patch, matchwood, immortal diamond,

Email ThisBlogThis!Share to TwitterShare to FacebookShare to Pinterest
Labels: I Am That, Mirror of St. Clare, reflections, The One and the Many
Newer Posts Older Posts Home
Subscribe to: Posts (Atom)