We Rise in Darkness 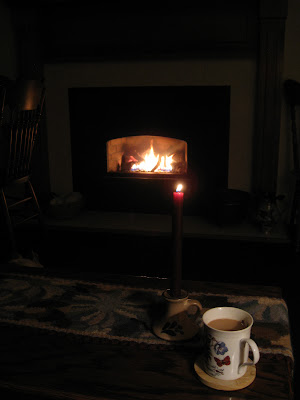 First coffee comes at 5:30 this morning. The quarter moon has already set and except for the brilliance of stars, the hermitage wakes in darkness. The nights already grow shorter, however. Since the December solstice we’ve gained a half hour of daylight in the morning and another half hour in the evening. With midday temperatures in the sixties, the itch of spring already teases our afternoons. And already, I’m missing the winter.
We are creatures of the dark. We are conceived and our bodies form in darkness. We protest with all the strength of our newbie lungs when we are pulled into the light of birth. Our vital organs function in the darkness of our shells. Thoughts smolder in the darkness of our minds until we breathe them into daylight. Darkness, even though it has come to represent danger or evil, is our most natural element and, during the winter months of introspection, is the actual condition in which we spend most of our hours.
No wonder the spiritual masters insist that Spirit can lead us to the Godhead only in obscurity, that we can glimpse divinity in this life only as “through a glass darkly.” John of the Cross wrote of the dark nights of the senses and spirit, “To reach a place that you know not, you must go by a way that you know not.” No wonder, then, that our deepest inclination is to plunge ourselves in darkness, like plants that in their botanical wisdom root themselves in the rich underground.
The message of winter, the message Christin’s sister Liz received during her final weeks, is “Be still and wait.” Endurance is all in the “bleak midwinter” until we are led once more to the annual renewal of spring.


To go in the dark with a light is to know the light.
To know the dark, go dark. Go without sight,
and find that the dark, too, blooms and sings,
and is traveled by dark feet and dark wings.

-Wendell Berry, "To Know the Dark"

~John
Posted by Christin Lore Weber at 6:52 AM No comments:

Julian of Norwich shared her hermitage with a cat, a small presence that must have had great import for her, as icons of the saint include her feline companion.

At Casa Chiara we have the blessing of many animal companions--wild ones as well as Mo, the hermitage dog. Visiting us each day are a herd of at least four deer, two foxes, a flurry of birds, a covey of quail, and in summer, helpers such as our lizards and tree frogs.

The day after Christmas I was in working in the kitchen when I heard a strange sound. Turning to the window I saw a kitten holding for dear life to the screen. By the time John and I got outside she was hiding under the thorn bush. He fed her. At that moment, says the vet, she claimed this as home. I went for two weeks refusing to give her a name because while the wild ones may have whatever access they have always had to this place; I insisted I do not want a cat in the house. But I ought to have learned by now that I don't always get to have things my way! The vet said she probably would prefer living outside because she showed the social behaviors of a feral cat, probably learned from her mother. Oh good, I thought, she can be another of the wild ones. Yesterday the sun shone brightly and Shiku sat on the deck railing grooming herself. I took thirty pictures of her.

Not more than two minutes later, while we were still watching her, John saw a shadow. Shiku turned her head to the left. Suddenly a hawk swooped in on her. Wings, feathers, so close--I've never seen a hawk in flight so close. A flurry and a tumble and two humans yelling NO. The bird flew away but Shiku barely missed being in those talons.

She's still very small. Three pounds. So today we will fix the garage for her. She's part of us.

"Nature is red in tooth and claw," I know. It applies to all of us, all the wee things, all the giants. Sometime before we lay our separate selves aside, we learn participation, and spend the remainder of our being here in passing back and forth, inhabiting the souls of this and that from all of which we learn the extent of what we are and are called to be. Shiku (the lion) is with us now as a teacher. May we learn well.

Posted by Christin Lore Weber at 10:06 AM No comments:

A Hard Time We’ve Had of It

There is one thing I ask of the Lord.


For this I long:


to live in the house of the Lord


all the days of my life.

(From the Vigil prayers for the Feast of the Epiphany)

The energy of prayer can fill not only the space set aside for it, but an entire house, and out into the surrounding neighborhood and the cosmos beyond. We sense when this happens and can say with all sincerity that we live now and will live always in the house of the Lord.


This is a constant theme in the Psalms because many dangers awaited the singer outside the Lord’s tent. The journey to the safety of the temple was long and arduous, as is the life journey for each of us. We see this reflected in T. S. Eliot’s poem, “The Journey of the Magi.” The journey can be long, the weather sharp, the trek punctuated with regrets and misgivings that the trip could be folly. And yet, in the end we have arrived at our destination, bearing such gifts as we have to offer, here at the small house where the babe rests in the arms of his mother.


We know now that our wish has been granted, that we may remain in this sacred space until our days end, acolytes in the temple of the Lord.
-- John
Posted by Christin Lore Weber at 2:28 PM No comments: