Is NOW too fast?

It's hard to focus on the present moment, hard to stay in the I Am that only is real right now. This morning I wrote this to a friend:

"You seem to me to be a person who gives yourself completely to each manifestation of Divine Reality as you perceive it in the moment. The suffering, I think, comes from our attempts to understand and categorize those experiences--asking "what does it mean?" And my experience is that the meaning of the past experience changes with each new realization, and the present experience only yields its meaning in retrospect--right while the meaning is already transforming because of the new place we stand." It was a new articulation of a formerly hazy thought.

At first I almost deleted this photo. The speed of the car turned land and trees into visions of wind.  Nothing is solid. Halos appear. Fortunately I realized before I hit the delete key that this is actually a great picture to illustrate this morning's realization.

Today I am meeting with a dear group of friends to discuss the question: "Picture yourself 100 years from now. What piece of wisdom would you have for yourself today?" What will I share? Really, I don't know--but I do know that it has something to do with the question posed by this photograph and the articulation of something I didn't know I knew until I tried to share it with a friend.
Posted by Christin Lore Weber at 11:27 AM No comments:

Always have God before your eyes wherever you go.
Whatever you are doing, have the testimony of holy scripture to hand.
Wherever you are living, do not be in a hurry to move away.
-Abba Anthony of the Desert

This morning John quoted a line from a book he received from his former classmate, Richard John Frielander. "In the Eastern confession of the Christian way Sacred Tradition rules theology and practice the way the Pope directs the Catholic Church and the Bible sets the bounds for Protestants." So now, John said, we just need to find out what Sacred Tradition means. Our recent desert pilgrimage calls us to delve more deeply into those traditions which place the human soul in the “marrow of flame” at the living center of God.

At St. Anthony’s Greek Orthodox Monastery John bought The Book of the Elders, a compilation of “sayings” of the desert Fathers (Abbas) and Mothers (Ammas). And I was attracted by an icon the monk told me was St. Mary of the Desert, but who, on research, turned out to be Amma Syncletike. 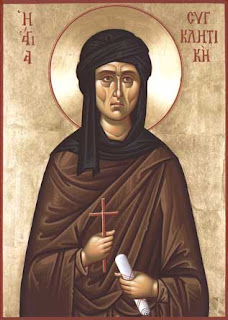 Both of these women were fifth century desert mothers, but Syncletike’s life more closely resembles that of Santa Chiara to whom our home is dedicated. Divine attraction is always accurate even if we are blind at first to where it leads.

These treasures remained in a bag in the back seat of the car until we arrived home.

A week later, in Prescott, AZ, we happened into the Old Sage Bookshop, and I was led to a book titled Marrow of Flame: Poems of the Spiritual Journey, by Dorothy Walters. I’d never heard of her, but I picked the book up anyway. Opening it at random, I read:

Something inside me
constantly bleeds towards God.

That’s why I keep writing
slipping messages under the door.

Well, that hit home! So I turned it over and discovered it was published by Hohm Press: John’s publisher. I read half of Dorothy’s poems that evening. The next day was the day I met Regina who spoke of Dorothy as “the real thing.” A true Amma. An elder, already in her eighties, she writes of the presence of the Divine Beloved within the human soul. She transcends religious structures. Now that I’ve returned to Casa Chiara, I’ve visited her blog and come to know her better. The traditions continue to be lived out in solitary hearts, in the direct communication of human with divine.

Whatever you look at, see God.
Whatever you do, act from God’s Word in your heart.
Wherever you are, BE.

Posted by Christin Lore Weber at 1:01 PM No comments: