We've satiated ourselves on beauty. This is truly a HOLY week for us; everywhere we look--Holy. Breathing Holy in, breathing out Holy. So much beauty I want to tell you all at once and my fingers catch fire, my breath becomes sparks of light. What do we do when the boundaries disappear and we are the mountain, are the coral colored sand, are the hawks, the antelopes, the wind?

I've wandered in the eyes of at least three magnificent women these past two days. I finally got to meet Regina Sara Ryan and I want to meet her again and again over whatever life remains. We sat outside with John and Mo at the Wild Iris Coffee Shop in Prescott, AZ, and spoke of wonder and writing (she's the editor for Hohm Press where John's Yearning For The Father was published). She and I discovered we had walked similar paths in life. Synchronicities began to appear, and then the urge to share every book, every person, every place and way and song that has held meaning.

The other two women I spoke with only briefly. One in a trading post somewhere past Cameron on the way to Zion. She came rushing in to tell the owner that she knew she was late but her electricity had gone out, and then she began enumerating a flurry of other things that had gone wrong that morning, but I couldn't focus on words because I was so caught up in the most amazing eyes I have ever seen. They were silver blue with violet rings around the iris which made them gleam as if light shone on brightly polished silver underneath the purest of mountain streams. I had to tell her: "I know you had a flurry of troubles this morning, but you also have the most amazing eyes I have ever seen." She grinned. "I have my father's eyes," she said. Then I paid for a Zion sweatshirt, and she was gone. Don't you wonder about such chance meetings and the ripples they cause? I can still feel those ripples from her eyes.

Then I met a Navajo woman named Sally. She was selling homemade jewelry by the side of the road. Some of it I could have put together myself with stones and beads from Fire Mountain in Grants Pass. I really wanted to buy something from her. Then I glimpsed a primitive turquoise necklace, two long strands of green stones shot through with brown, each stone separated from the next by those tiny Navajo seed beads that have a specific name but I can't recall it at the moment. I picked it up.

"Grandma made that," she said.

Immediately I thought of the Grandmothers, those wise women from various traditions and communities. Perhaps you've heard of them. I once leafed through a book containing their stories and photographs of their old and beautiful faces. I think of these elder women as the ground that keeps our world from spinning off into chaos. I think of them as weavers who create patterns by which our world can live. Of course I bought the necklace because it was sacred to me. And I will wear it as sacred beads, as connection to the Grandmothers and to earth.

"What is your grandmother's name?"

The beauty of the women, the beauty of the earth. How can I not be grateful to belong to such a sacred community as this? All through Zion my heart beat an earth rhythm, the golden earth reflected the sun, each moment fell into the one before as into the eternal

The Desert Will Flower

Along the highway south towards Florence, AZ, the desert flowers are in bloom. Such a gasp of color--such a cummings-like "sweet small feet of April into the ragged meadows of my soul." More than normal winter rains turned the mountains green and filled the washes with yellow, coral, lavendar, creamy white, blossoms. The Joshua tree branches burgeon with a spring green that is almost white.

We were on our way with Mike and Darlene Weber to the  St. Anthony's Greek Orthodox Monastery. In 1996 Monks came to the Arizona desert from Mount Athos in Greece to begin construction of this magnificent and holy place. Much of the design and art work came directly from Greece. As we prepared to visit, clothes were a big consideration. It was a bit like going into a foreign country. Women wear veils or shawls and long skirts. Men need to cover their arms and legs -- so long pants and long-sleeved shirts in the desert heat. We had a moderate day, though, so heat wasn't a problem. Darlene, Mike and I caught up on the Weber news as we made the hour long trip south from Mesa past the little town of Florence where the monastery is located. At a gathering place at the entrance to the large grounds, we were checked for appropriate clothing. I passed muster even though my sleeves came midway between my wrists and elbows. Something in me is ok with this monastic dress code, but something else questions the theology of human nature that requires it. I dropped all that for the time being and simply relaxed into the holy beauty of the place itself.

The monastery has seven chapels dedicated to the elders -- those holy "mothers and fathers of monasticism" who have gone before.

The walkways from chapel to chapel were beautifully landscaped with desert plants and large trees that provided shade. I loved these little pink flowers. 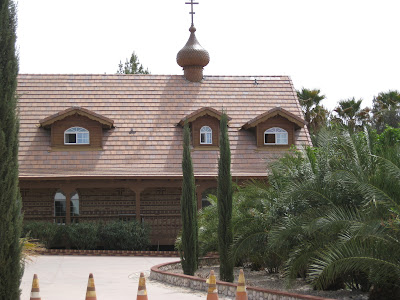 When we first began walking the paths, many of the monks were still outside working. They soon disappeared, probably into their various residences, because no one was in any of the chapels.

The reproductions of icons we found in the gift store can't do justice to the originals -- hundreds of them -- that cover the walls in the chapels. They are breathtaking. I was constantly lagging behind taking pictures of them, but now I discover that I missed some of my favorites simply because I don't read Greek! So I didn't know who they were. But I ought to have snapped a picture anyhow. My hearts aches for St. Mary of Egypt, one of the desert mothers whose eyes haunted the barren rocks and whose chanting echoed off the stones. 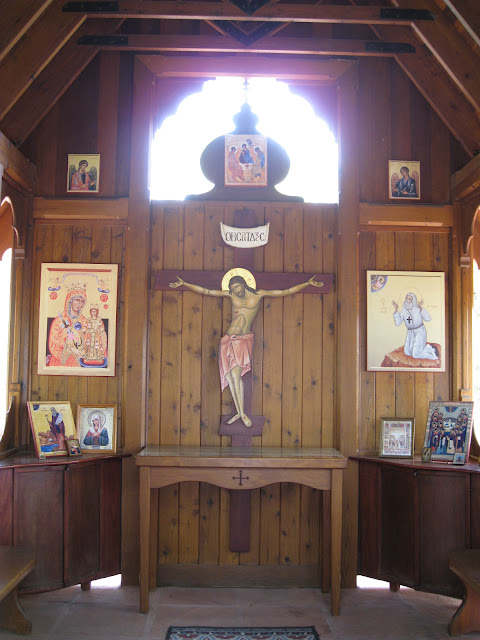 The final chapel was that of St. Seraphim, the most honored of the desert fathers. That's the holy man in white. Here was the first place I really wanted to kneel. More like a roadside shrine than a chapel, it radiated the simplicity of those early Greek Orthodox hermits of the desert. I could have stayed ... and stayed. Hurrying to catch up, I found the others on the way to the gift shop where John bought a book of the sayings of the Elders (the desert mothers and fathers), and I bought a small icon of St. Mary of Egypt because when I held the work in my hands it wouldn't allow me to put it back on the shelf. I suspect she has something important to tell me, so I will listen in the silence of my heart.
Posted by Christin Lore Weber at 1:25 PM No comments:

Many have written of the desert, and especially of the high desert. John is writing about the realm of desert spirituality now, as he progresses in his work on Mystic Mountain, in which he claims to be writing everything he knows about God and the spiritual journey of human life. It's early morning on this particular day at a Holiday Inn Express in the high desert of Lancaster, CA. Both of us are more than usually quiet, attempting to recover from a twelve hour drive yesterday. May whatever I possess of common sense prevent me from such a stunt ever again. Maybe, though, this exhaustion is the way the desert has its way with us. The wind. The heat. The dry. I've slowed to the speed of bare feet on rocks. My eyes squint at he chimera on the horizon.
Posted by Christin Lore Weber at 9:15 AM No comments: